Homepage → News → Where to go in a rental car in Azerbaijan: sights worth seeing

Where to go in a rental car in Azerbaijan: sights worth seeing 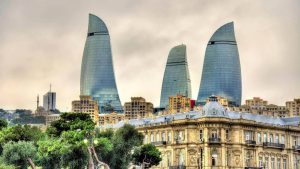 The best way to see all the beauty of Azerbaijan and manage to visit the most important sights is to rent a vehicle at an affordable price. Car travel will allow you to explore all the picturesque places of the vivid countryside.

What sights can you visit in Azerbaijan?

Tourists from all over the world are eager to see unique historical buildings with unusual architectural solutions. Many of the attractions are centuries-old — they still keep a presentable appearance and are real monuments of Oriental architecture.

It is quite problematic to travel around Azerbaijan by public transport. The main buildings of ancient architecture are located in places that can only be reached on foot or by car. You can rent a car at a bargain price — this will allow you to travel in comfort and visit as many attractions as possible, which are in great variety here. This is a unique historical site entered on the prominent UNESCO World Heritage List. You will see the oldest rock paintings and unusual mud volcanoes here. Travelers consider this attraction to be one of the most memorable. You can get to the reserve by car quickly — it is located 50 km from Baku. The place is considered exotic — here you can see fair large volcanoes, and thoroughly explore the rock paintings created in the primeval era. Scientists number over 6000 unusual rock drawings depicting a variety of scenes from the life of ancient people here, as well as exclusive inscriptions.

Carpet Museum — a spot with a valuable historical artifacts collection The major Carpet Museum is a well-known state institution in Azerbaijan. Here you can visit famous exhibitions of ancient applied art. The building features unusual displays made by ancient craftsmen. The museum, which was founded in 1967, has collected an incredible assortment of carpets. The oldest exhibit is a collection fragment of a carpet woven in the 17th century. The building is located in the heart of the city on the Seaside Boulevard. The modern museum building was constructed in 2014. The designers developed an unusual project — the architectural object itself is made in the shape of a rolled-up carpet. The ancient residence of the Sheki Khans is an unusual sight in Azerbaijan. Here you can see the key attributes of Caucasian architecture and thoroughly explore the features of the interior decoration. Art paintings on the walls tell a lot about Eastern culture.

The attraction is located in the center of the famous city of Shaki. The oldest architectural monument was built in the XVIIIth century and is a real masterpiece of Oriental architecture, made in the Persian style. The facade of the unique residence will impress tourists because picturesque drawings represent various scenes of war and hunting. The unusual design is complemented by bright ornaments made of pieces of colored glass and original openwork grates. The ancient building is located in the Republic of Nagorno-Karabakh and is a real work of religious architecture in the Caucasus. It is known that the very first mention of the ancient building appeared in the tenth century. The oldest Armenian monastery is an amazing architectural treasure that you should visit when traveling around Azerbaijan. The overall composition of the temple is striking — the construction was built following the oldest traditions of Armenian architecture. The shocking domed hall is complemented by unusual two-story buildings in the corners. Relief stone ledges with biblical scenes serve as an unusual design decoration.

In the Armenian language, the name of the Museum means “mountain of treasures” — in ancient times there were rich copper and silver mines. The building was repeatedly attacked and looted: until the 20’th century, nomadic peoples tried to conquer the monastery. Now it is quiet and peaceful — prayer services are held daily for peace throughout the world. This is a unique exhibit, located in the city of Baku. The monument is considered one of the most mysterious places located in the Eastern part of the famous Icheri Sheher fortress. Scientists consider this landmark a unique element of Eastern architecture, which has no counterparts around the world. The unusual construction is a real symbol of the city and stands on the highest ledge of the rock. The building has an exceptional design and is an original cylinder constructed from high-strength limestone. Inside the building, there are 8 additional tiers, which are connected by an elegant spiral staircase. There is also an unusual well, which reaches a depth of over 21 meters.

Modern archaeologists are interested in the reason for the construction of the building. Until now, the reason for its creation has not been studied. It is unlikely that this tower served as a means of defense, at the same time it is uninhabitable. Scientists suggest that the building is most likely a cult — it is known that right on the day of the winter equinox, the sun’s rays fall directly into the center of the unique tower. One of the most common beliefs is that the construction of the tower was associated with the cult of the sun — this is evidenced by the design features. The famous film “Diamond Arm” was shot here in Soviet times. You can see the unusual Oriental flavor of the unique buildings of antiquity by visiting the oldest quarters of Baku.

The oldest complexes are protected by a fortress wall, which is 3 m thick. The height of the walls is striking — it reaches over 8 m. It is believed that the city of Baku itself was born in this quarter. The historical complex contains 25 exclusive towers. This place is one of the main objects of Eastern culture — a large residence reflects the entire history of the city.

You can get to the old city through the oldest Shamakhi Gate, where you can see the most ancient expositions and exotic beauty — extraordinary residential buildings and baths, mosques, chapels and churches, Palace baths. Here you will see unusual stonework that combines rounded and cubic forms — ancient architectural ensembles impress with their luxury and originality of design.

You can get to the most ancient places in Azerbaijan by car. This is the only way to see the entire city’s beauty and visit the main attractions. Hospitable Azerbaijanis are always happy to see tourists. But it is important to determine the purpose of travel in advance — you can thoroughly explore all the local surroundings, or you can rent a car and see the entire country.

On average, tourists travel over 1000 km across the country. You should consider that in the deepest parts, the road can be unpaved, so it is important to choose a reliable car with cross-country capability. Renting a car in Baku will allow you to get an unforgettable experience — you can travel around the whole country in a short time.